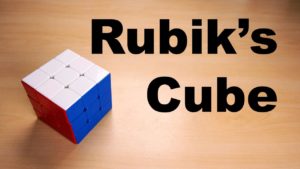 Rubik’s Cube is a 3-D combination puzzle which invented in the year 1974 by Hungarian sculptor and professor of architecture Erno Rubik. Originally it was called the Magic Cube. The Rubik’s Cube puzzle was licensed by Rubik to be sold by Ideal Toy Corp. in 1980. In a classic Rubik’s Cube, each of the six sides are cover with nine colourful stickers. Each of one side of six solid colours: white, red, blue, orange, green, and yellow. In currently sold models of it, white is opposite yellow, blue is opposite green, and orange is opposite red. The red, white and blue colours are arrange in that order in a clockwise arrangement. On early Rubik’s Cubes, the position of the colours varied from cube to cube.

The Rubik’s Cube has remained a popular toy for all the age group since its release in 1980. Despite being invented over four decades ago, the cube still challenges new generations and doesn’t seem that it is going to stop soon. The mathematical implementations behind this such as algorithms and combinations of moves help to make it a great educational tool for children. This combined with the hands-on learning style that it provides an entertaining and educational curriculum for students of all ages younger or older.

Do you want to solve Rubik’s cube? Do you want to become an expert in Rubik’s cube? If yes, you are welcome to Patrachar Group of Institutions. You can learn to solve Rubik’s cube at our institutions. This course is all about getting you to solve the most famous puzzle in the world. If you tried to solve it in the past and failed, don’t worry at all, we guide you step by step through our unique problem solving method. At Patrachar Group of Institutions, our teachers or trainers will be using 3D model software instead of a real cube in most of their lectures. It found out that 3D model software makes you see the moves far better than a real cube. We believe that anyone can solve the cube if he or she learned it as we teach.

Do you want to know about NIOS Admission?

The best way to learn it is, learning a few moves and then practice it for a day, and then a few moves and so on. And that’s exactly what we will be doing with you. With our methods and techniques, you will be able to learn to solve the cube in just 4 days. But it does not mean you will be fast in a week. No, it will take you some time depends on how much you practice yourself, to solve the cube in 3 minutes or less. If you learn in a way, it will enable you to memorize all the steps in 4 to 7 day. By the end of the course, you will learn all the steps necessary to solve the cube from start to finish. You also will be able to solve the Rubik’s Cube from any position.